Birds Directive (Directive 79/409/CEE) aims at the conservation and management of the populations of birds (terrestrial and marine), living in the wild and of the respective habitats, requiring the establishment of Special Protection Zones (ZPE’s).

The European Union (EU) adopts a strategy to protect and improve the state of biodiversity in Europe over the next decade. This strategy defines six goals that address the main factors of biodiversity loss and which will allow to reduce the damages in nature.

The Convention on Biological Diversity is an agreement signed between several parties (countries) which recognize the importance of protecting biological diversity, the sustainable use of natural and biological resources and the fair and equitable sharing of benefits arising from the use of genetic resources.
This Convention is the first agreement covering all aspects of biological diversity: genomes and genes; species and communities; habitats and ecosystems.
The United Nations General Assembly adopted it on 22 May 1992.

Biosphere Reserves are chosen based on scientific parameters that go beyond the objective of protection, since they intend to develop a management model, uniting local governments and societies and are regulated by the national laws of the countries, including three areas of zoning: core zone, buffer zone and transition zone.

In the Azores, Corvo and Graciosa Islands have been part of the UNESCO World Biosphere Reserves Network since 2007, Flores since 2009 and the Fajãs of4 São Jorge since 2016.

The Wetlands Convention is an intergovernmental treaty adopted on February 2, 1971, in the Iranian city of Ramsar. For this reason, this Convention is generally known as the “Ramsar Convention” and represents the first global treaty about conservation.

The Convention began in 1975 and currently has 2354 designated sites in 170 countries on all continents, covering a total area of ​​about 250 million hectares of wetlands.

Of the total number of wetlands in the Region, 13 Ramsar sites were officially designated, with a total area of ​​approximately 13,000 ha, of which 12 are located in the Regional Network of Protected Areas and are managed by Island Natural Parks (exception of the Paul the Praia da Vitória).

Directive 2008/56 / CE of the European Parliament and of the Council of 17 June or the Marine Strategy Framework Directive, which has been transposed into national law by Decree-Law no. 108/2010 of October 13 , altered and republished by Decree-Law no. 136/2013 of October 7, establishes a framework for Community action under which Member States must take the necessary measures to obtain or maintain a good marine environment until 2020.

The Marine Strategy Framework Directive is the environmental base of the integrated maritime policy referring that in order to achieve the good marine environment, Member States should develop strategies for marine waters under national sovereignty or jurisdiction.

In the Azores, the implementation of this Directive began with the preparation by the Government of the initial assessment report, or Marine Strategy for Subdivision of the Azores, which was published and submitted to the European Commission.

Following this evaluation, it was determined that the Region is in a Good Environmental Status, according to the descriptors considered. It follows that the objective set for the implementation of the 1st cycle of The Marine Strategy Framework Directive is to maintain or improve the current state of the marine environment of the Region until 2020. A Monitoring Program and an Action Program of have been defined for this purpose.

The OSPAR Convention is also a cooperation mechanism through which the European Union and the 15 Member States (the Contracting Parties) contribute to the goal of the Marine Strategy Framework Directive, by 2020 to achieve good environmental status in UE marine waters.

The National Ocean Strategy 2013-2020 is proposal for a public policy mechanism that presents a new development model of ocean and coastal areas that will allow Portugal to meet the challenges for the promotion, growth and competitiveness of the maritime economy, in particular, the important changes to the political and strategic framework at both European and Worldwide levels.

The Portuguese government is developing a new national strategic for the ocean for the next decade.

The Water Framework Directive (Directive 2000/60 / CE of the Parliament and European Council of October 23 of 2000) is the main instrument of the European Union Water Policy establishing a framework for community action to protect interior surface water , coastal waters and groundwater. It was transposed into national law through Law no. 58/2005, of December 29, altered and republished by Decree-Law no. 130/2012, of June 22.

The UE Water Framework Directive, adopted in 2000, is the culmination of the new paradigms of water resources management, based on sustainability, globality, integration, ecosystem approach and subsidiarity, culminating in public participation, in order to encourage citizens to become involved and actively participate in the protection and management of their waters.

The Regional Program for Climate Change (PRAC) is an essential tool for planning public policies, considering that the intensification of global climate changes imply an increase pressure on limited and fragile territories such as the Azores archipelago.

The PRAC has a high strategic relevance in regional or sectoral terms, taking into account that it can quantify and minimize greenhouse gas emissions and reduce vulnerability and exposure to climatic risks, increase resistance to extreme weather events and / or improve the ability to respond in an emergency. Thus, this program contributes to the territorial cohesion of the Region and to enhancing the security and protection of citizens. 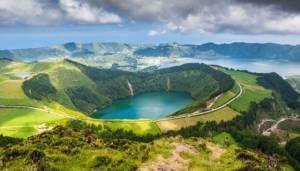